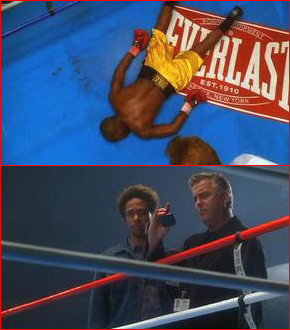 Largely associated with Mystery of the Week television series, this is an episode that is wholly or in part structured around the sport of boxing. These episodes tend to crop up most often in action/adventure and crime solving series, but they can also be played for laughs in sitcoms.

For the purposes of the episode, one of the show's regular characters will usually be revealed as a boxing aficionado. This can serve one of two purposes: providing a reason for the characters to attend or take part in a boxing event (when the course of the show normally wouldn't take them there), or allowing the character in question to offer some key piece of information that would only be known to someone who is familiar with the ins and outs of the world of boxing. The character's boxing savvy will rarely if ever be revisited outside the confines of The Boxing Episode.

Mixed Martial Arts may be used as a substitute for boxing. May involve an element of Fight Clubbing or Gladiator Games. Often this will be the result of a former boxer falling on hard times and entering a world of underground fighting to make ends meet, provide for his ailing child/wife/etc, or as an attempt to hang on to the limelight.

Compare with Pro Wrestling Episode and the Forced Prize Fight.

Examples of The Boxing Episode include:

Retrieved from "https://allthetropes.org/w/index.php?title=The_Boxing_Episode&oldid=1850452"
Categories:
Cookies help us deliver our services. By using our services, you agree to our use of cookies.