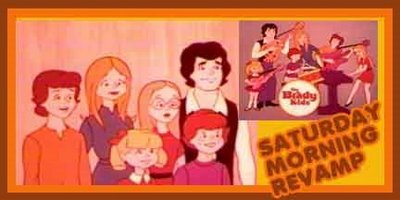 At least this way, we won't have to worry about them growing up.

The Brady Kids was the Animated Adaptation of The Brady Bunch, produced by Filmation and originally airing from 1972 to 1974 on ABC. Most of the plot was about their misadventures and their songs. They had instruments, too: Greg and Peter on guitars, Bobby on drums, Marcia on tambourine and Jan on keyboards. Added was Cindy (in front of Greg) on a smaller guitar. Alice and the parents were missing from the series, and Tiger had been replaced by Moptop, a different dog. They also had two pet pandas that spoke nothing but Chinese-sounding gibberish and a magical myna bird. They had a musical performance Once an Episode, and encountered various different guest stars, from Wonder Woman (in her first animated appearance) to The Lone Ranger.

Tropes used in The Brady Kids include:
Retrieved from "https://allthetropes.org/w/index.php?title=The_Brady_Kids&oldid=1729758"
Categories: