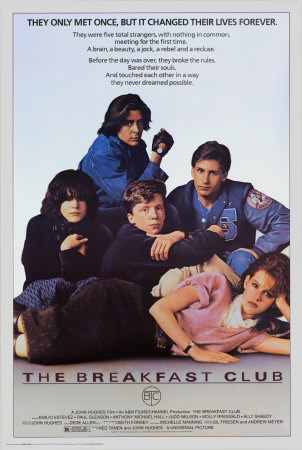 One of the most defining teen movies, it came to represent the genre and launch the careers of its stars, leading to the Brat Pack. The Breakfast Club follows the journey of five teenagers who have all landed themselves a Saturday detention. The main characters are characterized by their cliques, harassed by angry principal Richard "Dick" Vernon, and aided by Carl, the friendly neighborhood janitor.

The Breakfast Club was a 1985 film written and directed by the late John Hughes, a legend in the teen genre. It was named to the National Film Registry in 2016. The five principal actors in the film (Molly Ringwald, Anthony Michael Hall, Emilio Estevez, Judd Nelson and Ally Sheedy) became part of the "Brat Pack", a group of actors whose careers in the 1980s revolved around playing teens in popular movies with each other. This group also included Rob Lowe, Andrew McCarthy and Demi Moore.

Tropes used in The Breakfast Club include:
Retrieved from "https://allthetropes.org/w/index.php?title=The_Breakfast_Club&oldid=1792960"
Categories:
Cookies help us deliver our services. By using our services, you agree to our use of cookies.