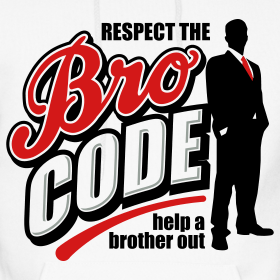 Just punched your best friend in the face? Put some ice on it and he'll be fine. Just wrecked his car? No prob, he's got insurance. Slept with his ex-wife/girlfriend? Whoah momma, you're in for a world of hurt!

Even among the closest Heterosexual Life Partners, there are some lines you just do not cross, and one of them's dating, sleeping with, or otherwise getting involved with a woman your bro has broken up with. If a guy breaks this rule, expect it to lead to incredible hostility in the friendship, lasting ... oh, about thirty minutes or so.

See its sub-trope Bros Before Hoes. Compare to My Sister Is Off-Limits, when the conflict is over dating a bro's sibling.

Examples of The Bro Code include:

Retrieved from "https://allthetropes.org/w/index.php?title=The_Bro_Code&oldid=1522240"
Categories:
Cookies help us deliver our services. By using our services, you agree to our use of cookies.