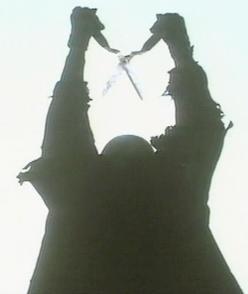 The Burning is a Slasher Flick from 1981. It was directed by Tony Maylam. It featured special effects by Tom Savini and its music was composed by keyboardist Rick Wakeman (of David Bowie and Yes fame).

Five years after a group of kids set Camp Blackfoot's cruel caretaker, Cropsy, on fire (in a prank involving a skull with candles for eyes), he gets released from the hospital. After killing a prostitute, Cropsy heads back to the camp with a pair of hedge clippers and starts offing campers left and right.

A former Video Nasty due to some rather bloody death scenes (most notably the infamous raft sequence, which ended up being heavily censored in order to get an R rating), the film is mainly known for its lack of availability for many years; the VHS release quickly fell out of print, causing the film to gain cult status among horror fans who were lucky enough to see it. After years of being in limbo due to rights issues, it finally saw an uncut DVD release in 2007.

Tropes used in The Burning include:

Fish: "Man, what the Hell are we supposed to be looking for anyway?"
Woodstock and Dave: "Your mother."