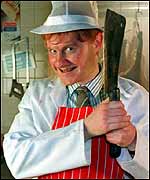 Want to make sure everyone knows exactly how bad your Badass is? Or how crazy your Ax Crazy gets? Add "The Butcher" onto his name. Butchers hack up meat all day and are always surrounded by blood and gore, so they must be violent, scary people, right? You'll certainly never see "The Baker" or "The Candlestick Maker" used this way, we guarantee.

Although the nickname can sound impressive, it's almost never intended to be a compliment in real life. The title is most often slapped on serial killers and military leaders who are accused of war-time atrocities. "To butcher" something can also mean to do a hack job of it, so the title can sometimes be a Stealth Insult. Due to the many negative connotations of the word, it's no surprise that many butchers prefer to go by "meat cutter."

The stigma against butchery is largely unfair to professional meat cutters, who don't slaughter anything to begin. All they really do is chop big hunks of meat into smaller hunks of meat.

Examples of The Butcher include:

"Well, sir," replied the Canadian, whose enthusiasm had somewhat calmed; "it is a terrible spectacle, certainly. But I am not a butcher. I am a hunter, and I call this a butchery."
"It is a massacre of mischievous creatures," replied the Captain; "and the Nautilus is not a butcher's knife."

"I did what had to be done. When I'd finished, there was no more terror by night in Perak. No more Kota Banus.[1] No more butchering of little girls. God knows, that should count for something."

The Butcher had bouts of madness in spring, the Butcher's brother Red Jehan was mad all year, their infamous riders were counted by hundreds, their hounds knew human flesh, and this their motto ran like cold fog over the moors: Face Campscapel, Face Death.

Parker: The butcher is here!
Elliot: Does he have the baby lamb chops?
Hardison: No, the Butcher of Kiev.

Real Life examples who have appeared in fiction

Godber: (nervously) "So what did he do?"
Fletch: "Fiddled the VAT on his sausages."