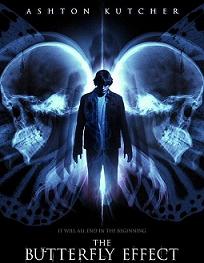 It's about a guy who can travel back in time by reading journals and change what happened, and uses this ability to try to undo various traumatic events he and his friends suffered as children. Despite his best intentions, the results aren't always good. What's more, his brain suffers from trying to assimilate all the new memories.

The title is a reference to the butterfly effect, which theorises that a change in something seemingly innocuous, such as a flap of a butterfly's wings, may have unexpected larger consequences in the future, such as the path a hurricane will travel.

It was followed by two largely unrelated Direct to DVD sequels, 2 and 3: Revelations.

Tropes used in The Butterfly Effect include:
Retrieved from "https://allthetropes.org/w/index.php?title=The_Butterfly_Effect&oldid=1586248"
Categories: