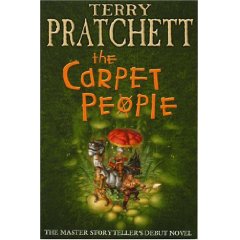 They called themselves the Munrungs. It meant The People, or The True Human Beings. It's what most people call themselves, to begin with. And then one day the tribe meets some other people and give them a name like The Other People or, if it's not been a good day, The Enemy. If only they'd think up a name like Some More True Human Beings, it'd save a lot of trouble later on.

"This book had two authors, and they were both the same person": A novel by Terry Pratchett which was originally published in 1971, but was later re-written by the author when his work became more widespread and well-known. The Carpet People contains much of the humour and some of the concepts which later became a major part of the Discworld series, as well as parodies of everyday objects from our world. Before creating the Discworld, Terry Pratchett wrote about two different flat worlds, in this novel, and Strata.

The story follows the journey of a tribe called the Munrungs, across a world known as the Carpet. Instead of trees, the landscape is a forest of hairs, littered with large grains of dust. Below the surface is the Underlay, riddled with caves, and below that the Floor. The Munrungs cross the carpet to find a new home after their village is destroyed by the powerful and mysterious natural force known as Fray. The origins of Fray are never explained in the book, but it is described in a way to suggest sweeping or vacuuming. (Or possibly a human stepping across the carpet? Pismire does say the incidents all lie in a straight line, and it's described in terms of pressure downwards...)

The tribe is led by Glurk, who is advised by Pismire, a philosopher and the tribal Shaman. Glurk's younger brother Snibril, however, is the book's protagonist, and is described by Pismire as having the kind of enquiring mind which is "dangerous". Snibril also has the unique ability to detect Fray a few minutes before it strikes - this ability manifests itself as an extremely painful migraine.

Tropes used in The Carpet People include:
Retrieved from "https://allthetropes.org/w/index.php?title=The_Carpet_People&oldid=1528155"
Categories: