The Cat and the Canary 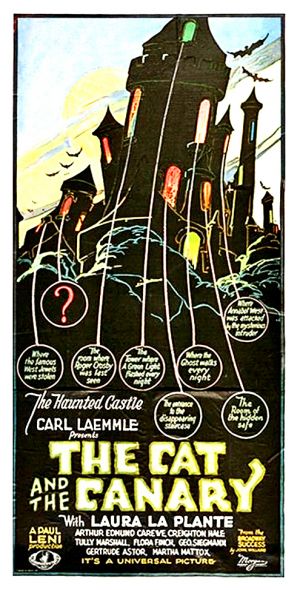 The Cat and the Canary is a stage play by John Willard from 1922.

Its plot concerns the inheritance of Cyrus West, an eccentric old man with much contempt towards his relatives and who decreed that his will is to be read in his mansion twenty years after his death, at midnight with all his living relatives present.

Twenty years later, on a dark and stormy night, six of his relatives arrive at the mansion to hear out the will. The old family lawyer opens the envelope containing the will and it is written that Cyrus' fortune goes to his most distant relative with the surname of West, who happens to be Annabelle. Only On One Condition though; she must be deemed sane, as Cyrus felt that his relatives were insane like he was during his last days. If she fails to fulfill this condition, the fortune goes to Cyrus' second most distant relative, named in another letter.

This is a start for one very long night, as an Ax Crazy mental patient who slashes at his victims like a cat is stalking the West mansion grounds, and Annabelle's sanity is put into question after the lawyer suddenly vanishes.

The play has been adapted into several movies, notable ones being the 1927 silent film (which was one of the earliest Universal Horror movies), 1930 sound remake of the latter titled The Cat Creeps and its Spanish version La Voluntad del Muerto (both are now unfortunately lost) and the 1939 version starring Bob Hope.

Tropes used in The Cat and the Canary include: