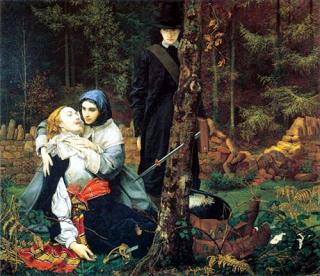 The favorite era for the Swashbuckler, this is the age in Europe when lusty musketeers duelled with each other and got sucked into intrigues involving dauphins, Corrupt Churchmen and vampish courtesans. Hats with large feathers were in fashion for men. Also the Golden Age of Piracy on the High Seas, when peg-legged buccaneers buried stolen gold, brandished cutlasses, tied up buxom, bodice-wearing maidens and then forced them to watch as their hapless boyfriends walked the plank.

Somewhere in the middle, England had a civil war. Dashing Cavaliers fought dour Puritans the length and breadth of England, and the son of the King hid in an oak tree. The Puritans won, and abolished Christmas, then the country abolished them. The surviving puritans left England and founded the United States, Charles II climbed back out of the oak tree, London burnt to the ground, women were allowed to be actors on stage and Newton invented gravity. Somebody named Pepys kept a diary.

Later still, King James II, believer in absolute monarchy was run out of Britain in a Glorious Revolution. Parliament's invitation of Stadtholder William III of Orange as the new King made it real clear who is really in charge of the island from now on as modern democracy takes its next step into fruition. Meanwhile, in the Bahamas, this is the best kind of news to the pirate, Captain Blood and his crew, who were enslaved by James II, as they accept the new king's commission to join the British Navy.

Back on mainland Europe the Thirty Years' War was fought; France, Sweden, and Austria fighting over the Holy Roman Empire, hastening its long, painful decline.

Sometimes explicitly called the Age Of Exploration, especially the more pirates are involved.

If you want to do the pirates thing on land, remember that after the Restoration in England was the heyday of The Highwayman, so adventures featuring Dick Turpin and Claude Duval will be at about this time.

The Cavalier Years provides examples of the following tropes:
Works set in this time period include

Retrieved from "https://allthetropes.org/w/index.php?title=The_Cavalier_Years&oldid=1522247"
Categories:
Cookies help us deliver our services. By using our services, you agree to our use of cookies.