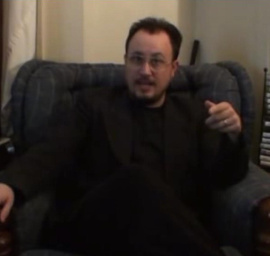 "If I want information, I'll stick with real user edited Internet encyclopedias -- like Wikipedia, thank you very much!"

Jones also produces and hosts several other series on his website, including:

He is also co-starring in Ninja the Mission Force, a series by Dark Maze Studios which parodies the ninja films of Godfrey Ho and other 80s "ninjasploitation" films. He wrote and starred in a number of independent films, including Paranoia.

Man has the voice of a young Jack Nicholson, and is a featured contributor on That Guy With The Glasses. His YouTube channel, can be found here.

Tropes used in The Cinema Snob include:

Retrieved from "https://allthetropes.org/w/index.php?title=The_Cinema_Snob&oldid=1868493"
Categories:
Cookies help us deliver our services. By using our services, you agree to our use of cookies.