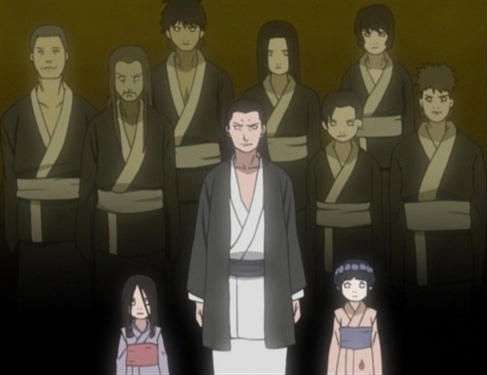 The transition from nuclear family to clan is gradual, but you know it when you have a clan at hand. These families often consist of many family branches and generations, are called collectively "The Foobars", or pompously, "House (of) Foobar". They might have their own family mythos, and the members often resemble each other in looks and personality. Two such clans can engage in lengthy wars.

If there are several clans, each has a tendency to actually wear a hat. This is popular in a lot of fantasy works. For example, you'll generally run into at least some of the following: a Proud Warrior House, an Evil or Arrogant Aristocrat House, a Greedy Merchant House, and of course The Hero House.

Holding the clan members together is an official or unofficial head of the family. This person can be an ancestor, someone whose personality centers their family on them, or an actual post that gets passed on through one of the family lines. Often this post is mythological or totemic, using some sort of Motif rather then actual though of course collective decisions have to be made by a living person such as chief or elder or counsel.

The exact nature of a clan differs. In some societies it is more like a long running extended family, in others it is a small kingdom all of whom are cousins. Some have a rather confusing network of ever expanding kinships and debts of honor with clans having somewhat fuzzy borders(both territorial and genealogical) between them.

The trope is at least Older Than Feudalism: The Greek pantheon is a sprawling family large and interconnected enough to count. They say blood is Thicker Than Water, and it is easy to empathize with the characters. Just like the real ones, the fictional clans can be the safe haven in the storms of life or a maelstrom on the high seas and everything in between. Sometimes alternating. If the clan is powerful and their name ancient they will often be as degenerated as they are proud. A good example of this comes from the culture which provides the term clan The modern Irish word "clann" still means "family" and ancient Scots and Irish societies were organized around extended family structures.

Writers often use related characters to show variations on a theme: each character or generation can provide similarity and contrast to each other.

Upbringing and heredity mark one forever (often, Lamarck Was Right too). And relatives, as everybody knows, are impossible to eliminate. All this makes for a lot of characters, clashing personalities, drama, humour, mysteries, characterization and plot.

And of course they all care about Family Honor a lot. And are convinced that their clan is better then yours.

Never to be confused with The Klan.

Examples of The Clan include:

There's also a handful of vague implications that the Prince of Verona is himself the head of a third clan, which is also apparently decimated by the feud (Mercutio, his nephew and presumptive heir since no royal children are mentioned, dies moments before his own killer, the youngest male Capulet, Tybalt, and the prince's cousin Count Paris is killed by Romeo Montague only a little while before the deaths of Romeo and Juliet). In the end, the prince shares in the Montagues' and Capulets' grief by commenting that he has also lost "a brace of kinsmen".