The Count of Monte Cristo (novel) 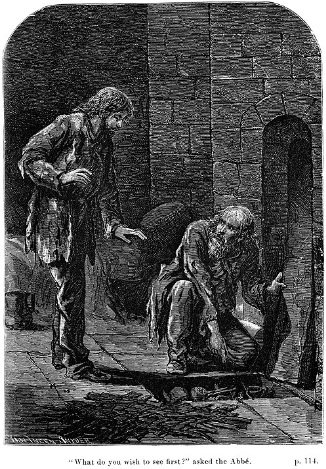 A serialized adventure novel by Alexandre Dumas Sr., published in the Journal des débats from August 1844 to January 1846, based loosely on an allegedly true story which Dumas discovered in a collection of police reports.

Edmond Dantes is a naive, entirely benign young sailor who has just been made captain of his ship, and is newly engaged to the beautiful Mercedes. Just as his life seems like it couldn't get any better, he is framed as a Napoleonic spy by four men, each with his own sinister aims, and sent to life imprisonment in the Chateau d'If.

During his years in prison, Edmond meets Abbe Faria, a fellow prisoner who becomes his close friend. Faria educates him in a variety of subjects, helps piece together the truth about his imprisonment, and before dying, tells of a treasure of unthinkable magnitude buried on the island of Monte Cristo. Edmond manages to escape, and finds the treasure.

He returns to France as the mysterious, brooding, immensely wealthy and highly cultivated Count of Monte Cristo. He discovers that the men who sent him to his fate have all become very rich and powerful, and sets about using their own evil pasts and tainted passions to enact an elaborate and cruel revenge on all of them.

Often regarded as the greatest revenge story of all time, this novel remains a popular classic. Numerous films and television series have been based on it, including the Anime Gankutsuou (in space!) and an episode of The Famous Adventures of Mr. Magoo. It also inspired Alfred Bester's classic SF novel The Stars My Destination (also in space!) and Stephen Fry's The Stars' Tennis Balls (aka Revenge: A Novel) which has a lot of fun with Significant Anagrams.

The novel is in the public domain in the United States and is available online for free at Project Gutenberg, Google, Amazon, and so on.

Adaptations with their own trope pages include:
Tropes used in The Count of Monte Cristo (novel) include: