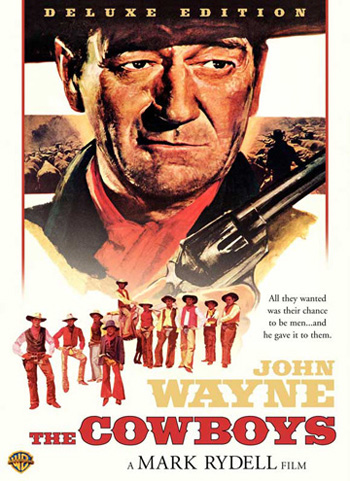 Wil Anderson (John Wayne) of the Double O Ranch has a herd of cattle he needs to get to market before winter. Unfortunately, all the able-bodied and available men have run off to join a nearby gold rush. His friend, Anse Peterson (Slim Pickens) convinces him that he could hire local schoolboys. Initially reluctant, Anderson is eventually forced to go with the idea. He ends up with 11 boys between the ages of 9 and 15. Joining them on the drive is Jebediah "Jeb" Nightlinger (Roscoe Lee Browne), their Camp Cook, and the first black man the boys have ever seen.

The boys learn quickly to do a man's job, but the group is being followed by a gang of ruthless rustlers....

Tropes used in The Cowboys include:
Retrieved from "https://allthetropes.org/w/index.php?title=The_Cowboys&oldid=1748681"
Categories: