The Cries of Haruhi Suzumiya 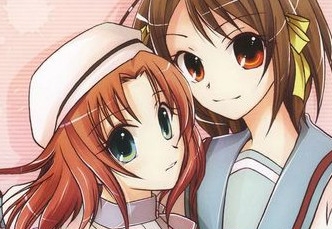 I'm pretty sure I don't like this place. We've ran into two girls with weapons, nobody seems trustworthy, and to top it off, Haruhi's acting like a psychopath. Although, compared to what she'd be acting like in a few days, it's practically the pinnacle of sanity. You think this stuff is bad? Wait until people start dying. Then the story really picks up.

The Cries Of Haruhi Suzumiya [1] is a Suzumiya Haruhi / Higurashi no Naku Koro ni Crossover Fanfic written by User:Thnikkafan. It features nearly everything present in both shows: comedy, horror, Mind Screw, a unique style of narration (or not), and death. Lots of death.

A basic summary: In the small sleepy town of Hinamizawa, there have been a string of murders connected to the Watanagashi festival. This has piqued the interest of one Haruhi Suzumiya, who has decided to investigate it and bring the SOS Brigade with it. But things, naturally, are more than they seem...

It can be found here and here. There's also a story inspired by this one which Thnikkafan has deemed to be in continuity with The Cries of Haruhi Suzumiya. You can find it here.

Tropes used in The Cries of Haruhi Suzumiya include:

Kyon: Now, I know perfectly well how to make curry, but our author lacks knowledge that me, Tanigawa-sama, and probably most Japanese people have about the curry-making process, so it'll have to be glossed over.

"Yay! You've finally managed to figure out the difference between reality and mental images!"