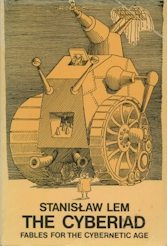 The Cyberiad: Fables for the Cybernetic Age (Cyberiada in the original Polish) is a series of short stories by Stanislaw Lem, following the adventures of the "Constructors" Trurl and Klapaucius. As Constructors, they have the skills and ability to build almost anything imaginable. This doesn't stop them from getting into trouble when they try to sell their abilities, however.

In the late '80s, one of the stories was adapted for public television (jump to 1:06:34), with the principals changed from Ridiculously-Human Robots to Human Aliens (but nonetheless quite well-cast.)

Tropes used in The Cyberiad include:
Retrieved from "https://allthetropes.org/w/index.php?title=The_Cyberiad&oldid=1519486"
Categories: