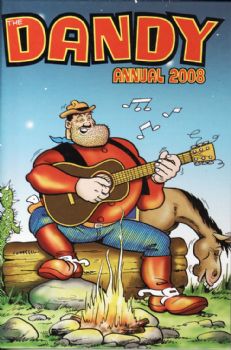 The Dandy is a long-running children's comic published in the United Kingdom, running several different stories and characters. Published by D. C. Thomson & Co. Ltd. The first issue was printed in 1937, making it the world's third longest running comic, after Detective Comics and Il Giornalino.

The first issue, under the name The Dandy Comic, was published on 4 December 1937. It was published weekly until September 6th 1941, when wartime paper shortages forced it to switch to fortnightly, alternating with The Beano. It returned to its weekly schedule on 30 July 1949. From 17 July 1950, the magazine changed its name to just The Dandy.

After issue 3282 (October 16th 2004) The Dandy underwent a radical format change, reflecting a more television-oriented style, and now printed on glossy magazine paper instead of newsprint. In August 2007 (issue 3426), The Dandy had another update, becoming the fortnightly comic Dandy Xtreme. It cost £2.75 (with some issues costing up to 2.99 depending on how many gifts there were). It then reverted back to its original comics form, albeit retaining the more glossy paper, in November 2010 and costs £1.50 a week.

See The Beano, The Dandy's partner-in-mischief.

Not to be confused with The Dandy.

Tropes used in The Dandy (comics) include:
Retrieved from "https://allthetropes.org/w/index.php?title=The_Dandy_(comics)&oldid=1773819"
Categories:
Cookies help us deliver our services. By using our services, you agree to our use of cookies.