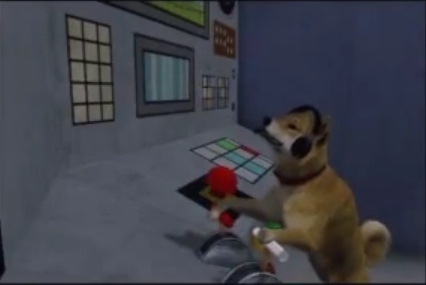 Huh. That explains everything.

You're getting close. The clues are fitting together, and everything is unraveling. You're this close to finding The Man Behind the Man. Your trail of clues finally ends, and the Big Bad is...

...the little kid that was always playing jacks in the park?!

Yes, that's right. The Man Behind the Man turned out to be about the least conspicuous person possible. The Hidden Villain was underneath your nose the whole time. The dog was the mastermind!

This trope is when, through a rather jarring plot twist, the true Big Bad or The Man Behind the Man turns out to be a seemingly completely inconspicuous character, the last person anyone would ever suspect, often as part of the villain's Evil Plan. You've seen him before. Maybe once, maybe a few times, maybe repeatedly throughout the story but you never suspected a thing up until The Reveal. Sucker.

Simply identifying the dog isn't enough to satisfy the requirements of this trope; The Reveal has to be a surprise both to the heroes and to the audience (and sometimes even to the villains)-- the Hidden Villain was in plain sight all along, either without any clues or hints as such or just very subtle ones. It's not really about the identity of the Big Bad but a case where the pivotal character who drove everything turns out to a random character you'd never suspect.

Beware, however, in certain types of fiction, such as when you are supposed to guess the identity of the villain, this can come off as an enormously crappy Deus Ex Machina.

Sometimes appears in a Clueless Mystery. Sometimes involves the Almighty Janitor or Beware the Nice Ones.

Keep in mind that this is a Reveal Trope, so beware of spoilers!

Examples of The Dog Was the Mastermind include:

Retrieved from "https://allthetropes.org/w/index.php?title=The_Dog_Was_the_Mastermind&oldid=1804803"
Categories:
Cookies help us deliver our services. By using our services, you agree to our use of cookies.