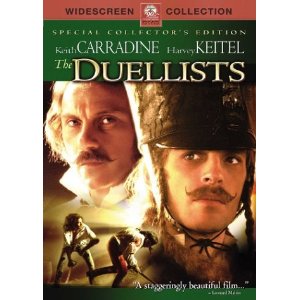 The duellist demands satisfaction. Honour, for him, is an appetite. This story is about an eccentric kind of hunger. It is a true story and begins in the year that Napoleon Bonaparte became ruler of France.
—Opening narration

Two French cavalry officers in Napoleon's Grande Armeé have a disagreement. It can only be resolved, of course, with a duel. And another, and another, and another, as they meet half a dozen times over more than a decade. They duel with cavalry sabres, with smallswords, with pistols. Despite their failure to kill one another, the fiery Gabriel Féraud keeps challenging the cool, more rational Armand d'Hubert, long after Féraud has forgotten the original slight.

Ridley Scott's first feature film examines Féraud's consuming obsession, and d'Hubert's inability to say no to another potentially fatal challenge. The screenplay is based on the short story "The Duel" by Joseph Conrad. Winner of the Best Debut Film award at the 1977 Cannes Film Festival.

Tropes used in The Duellists include:

d'Hubert: He's most unreasonable!
Jacquin: The enemies of reason have a certain blind look. Fereaud has that look, don't you think?

You cannot fight, one: if you're in different places. Physical impossibility. Two: if you're of different rank. Breach of discipline. And three: if the state is at war. Duels of nations take absolute precedence.
Therefore, keep away from him. Keep ahead of him. Put your trust in Bonaparte!