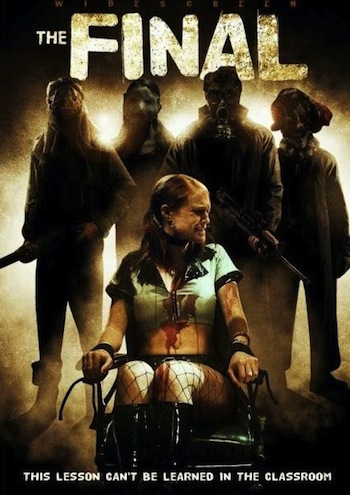 "Ask yourself one question: 'What did I do to get here?'"


"Consequences. None of us are free from them."
—Dane

"This lesson, you will not learn in school."
—Emily

Loosely based on actual events, The Final is a 2010 horror film about a group of high school outcasts who lure their tormentors to a party, drug them, and exact their vengeance upon them.

After being continuously bullied throughout High School, and having all attempts at peace-making being met with laughs, Dane and his friends (Emily, Jack, Ravi and Andy) concoct a plan to not only get revenge, but to also send a message to the entire country. After learning in class about deadly chemicals and the torture methods of cultures past, and gaining inspiration from their vast collection of horror films, the desperate teens set up the Workley ranch house with webcams and create a party, inviting all of their bullies to attend. The five then pray to God to give them a sign to stop them, and when none comes, they carry out their plan.

At the party, the five outcasts dress up in funny costumes that mask their identity, and serve spiked punch to their victims, knocking them unconscious. The five then change costume, creating a darker visage to wear as their personas. The guests awaken in chains, and Dane tells them that, for the years they spent abusing students that they saw as weak and helpless, they would pay for their sins: the bullies would not die, but by the end of the night, they will wish that they had.

The film was part of the After Dark Horrorfest film festival.

Tropes used in The Final include:

Emily: "I wanted to be your friend. But now I'm going to be your enemy."