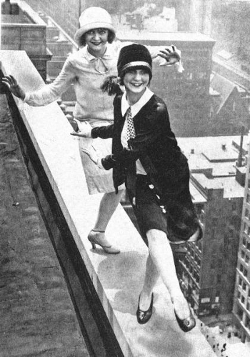 Two flappers dancing on the edge of a roof. In heels.

The quintessential Twenties (American, Western European or sophisticated) woman. A young lady ever more spirited than the Spirited Young Lady, thanks to feminine liberty. She danced the Shimmy and the Charleston, wore make-up for the first time since the 18th century, drank with the boys, and enjoyed various other delights The Roaring Twenties had to offer. Short hair, short skirts, short, loose & low-waisted evening gowns, high rolled stockings, boyish figures, and swanky cloche hats were a must.

Their sexual liberty was a result of women's growing hatred of the classic Double Standard; that promiscuous men were "studs," while promiscuous women were "whores." In their eyes, men and women were equal, so they could be just as sexually free. Another factor was the then popular view of women as house wives and mothers who should be subordinate to their men and preferably not leave the house.

Examples of The Flapper include: