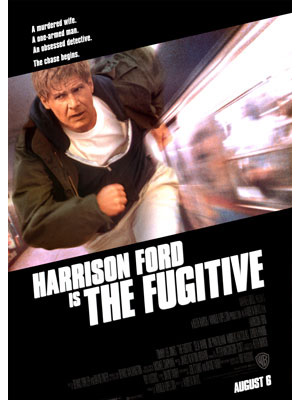 Dr. Richard Kimble is a highly-respected Chicago cardiovascular surgeon. That fact alone, however, cannot save him when he is wrongly accused and convicted of his wife's murder. Fortunately for him, the bus transporting him to prison crashes after some of the prisoners attempt to revolt, and he escapes by the skin of his teeth. He returns to his hometown, determined to find the one-armed man who actually committed the crime. However, he is hampered in his attempts by Deputy US Marshal Samuel Gerard, who is intent on seeing him sent to his cell.

In the course of doing so, however, both Kimble and Gerard discover that the problem is bigger than the both of them, and several parties actually want to see Kimble dead.

The film had a sequel in U.S. Marshals, which featured Gerard and his team pursuing another fugitive.

Tropes used in The Fugitive (film) include:
Retrieved from "https://allthetropes.org/w/index.php?title=The_Fugitive_(film)&oldid=1878979"
Categories:
Cookies help us deliver our services. By using our services, you agree to our use of cookies.