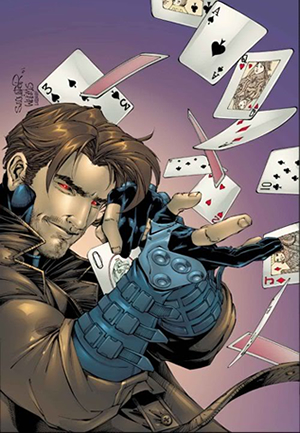 "The sound of rollin' dice to me is music in the air,
'Cause I'm a gamblin' boogie man, although I don't play fair!
It's much more fun, I must confess, when lives are on the line,


Not mine, of course; but yours, old boy! Now that'd be just fine."
—Oogie Boogie, The Nightmare Before Christmas

The gambler follows a card (or dice) theme, uses cards, dice, darts, coins and gambling implements as weapons, and is very well-versed in blackjack, Poker, craps, and all sorts of casino games. They rely much more on luck and cunning than on skill and outright power, and very seldom take it too hard on the occasions they lose, usually due to believing it was due to chance.

They tend to be slick, either elegant or gaudy, just like professional card players from the past, and are more towards lean and nimble than strong and resistant. Due to their very nature, they tend to fit the definition of Tricksters, and one would be hard-pressed to find a particularly slow-witted person, or a grunt, in the position of the Gambler.

The entire theme around the gambler makes him usually either an Anti-Hero or an Anti-Villain, due to a view that they usually revere luck and chance over pledged allegiances, and that they will usually be too chaotic to be too specifically good or evil, Joker being a rather brutal exception to this rule. This trope is almost entirely populated by men, and it has been increasingly common as time goes by. See also: Death Dealer (using playing cards as weapons), as well as Born Lucky and Winds of Destiny Change (when the character has actual powers over luck).

For actual gamblers, see The Gambling Addict or Professional Gambler.

Examples of The Gambler include: