The Golden Voyage of Sinbad 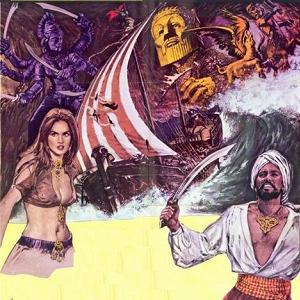 Trust in Allah, but tie up your camel.

Sinbad the Sailor searches for the lost continent of Lemuria with the help of his trusty crew along with the disfigured Grand Vizier of Marabia and the perpetually under-dressed ex-slavegirl Margiana. Along the way they will battle the evil sorcerer Prince Koura and encounter fantastic creatures such as the griffin and -in the film's most technically stunning moment -- a six-armed statue of Kali brought to life through Koura's magic.

With special effects by Ray Harryhausen and a musical score by Miklos Rozsa (who also scored the 1940 version of The Thief of Bagdad) The Golden Voyage of Sinbad is definitely an enjoyable experience -- they don't make 'em like this anymore.

Not to be confused with the MST3K-featured The Magic Voyage of Sinbad (actually the film Sadko).

Tropes used in The Golden Voyage of Sinbad include: