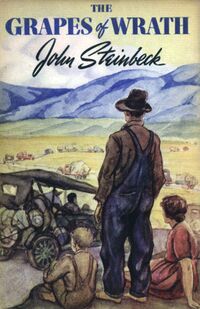 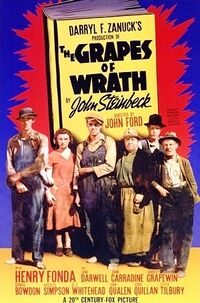 The Grapes of Wrath is a 1939 novel by John Steinbeck.

The story follows a poor family from Oklahoma hit by the dust bowl that travel all the way to California (losing the grandparents along the way) to find jobs on the orange farms. Sadly, they discover that the work conditions are horrid and farms are overpopulated.

Made into a film directed by John Ford and starring Henry Fonda. The film is considered one of Henry Fonda's finest performances, and the book makes a strong political statement (of the social liberal kind) and is pretty much the antithesis of anything by Ayn Rand.

Tropes used in The Grapes of Wrath include:

Tropes about the film, which deserves its own page, include:

Infoboxes for the novel:

Infoboxes for the film:

Retrieved from "https://allthetropes.org/w/index.php?title=The_Grapes_of_Wrath&oldid=1921805"
Categories:
Cookies help us deliver our services. By using our services, you agree to our use of cookies.