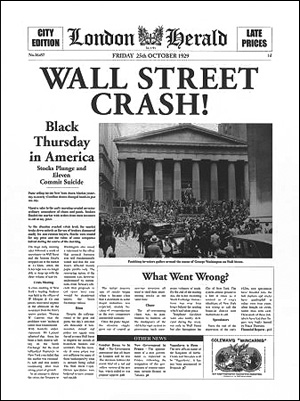 The Great Depression / The Dirty Thirties: Home to dust bowl farmers, reedy-voiced folk singers and rail-riding hobos. Life pretty much sucks unless you're lucky enough to be a rich socialite, in which case you can expect to be involved in a wacky screwball comedy which may or may not involve either three short, bumbling men named Larry, Moe and Curly, or two fast-talkers named Groucho and Chico and their mute accomplice Harpo (as the Depression drove prices plummeting through the floor, people with money suddenly found their cash increasing in value). Or if you're female, you could ditch the dust bowl and head off to Hollywood to become an actress, wearing long, sexy gowns on première night, showing off some tanned skin.

Otherwise, you would be scraping to survive, as Steinbeck wrote in The Grapes of Wrath and Of Mice and Men. For some, it's a time to run wild to take what you want against the fatcats who exploited the people as one of the Public Enemies like John Dillinger or the bank robbing couple Bonnie and Clyde. Others found more constructive paths such as folk singer Woody Guthrie who rode the rails Bound For Glory singing as the voice of the underprivileged. And there were more than a few examples of Pennies From Heaven-style escapism as listeners didn't want to be reminded of the hard times they faced.

Against this, President Herbert Hoover found himself completely over his head, refusing to accept reality of how bad the times were, while blindly mouthing absurd statements like "Prosperity is just around the corner." A "Hooverville" was a shantytown, a "Hoover wagon" (or "Bennett Buggy" in Canada) was a Model T Ford pulled by horses and a "Hoover flag" was a trouser pocket turned inside-out to indicate it was empty. Hoover was replaced by Franklin D. Roosevelt who did his best to pull America out of the economic ruin with his New Deal; he was elected to an unprecedented four terms as president before dying in office in April 1945.

In addition, you could be a globe-hopping Adventurer Archaeologist in foreign parts having adventures with the natives while fighting the Nazis who are searching for any artifact that would give them the edge in a coming war.

If you're in Europe, chances are you are living in the Nazi or fascist version of Ruritania, trying to forget your troubles in the Cabaret while the Black Shirt goons become more bolder and brutal outside as your country slides into a fascist hell. As for the rest of the world, the communists seem to be the greater threat, until Those Wacky Nazis start getting greedy enough to betray their true ambitions (and for those already under communism, like say, some parts of the USSR, well, they're about to learn the wonders of cannibalism, or worse, end up in The Gulag for thinking unhappy thoughts about Stalin). At that the Western powers slowly begin to realize that appeasing them is making them worse and they have to stand up to them.

Period lasts from The Wall Street Crash of 1929 up until the beginning of World War Two. Note that in Real Life there were several sub-periods; the Hoover years, the New Deal years up to 1937, a second recession and a subsequent 1939-41 recovery that was just picking up steam when the war build-up started.

It should also be noted that the mass suicides of financial professionals (jumping from office buildings or hanging) of 1929 are a long-standing Urban Legend—only about twenty people killed themselves immediately after the Crash and about one hundred in all. 23,000 people did kill themselves in the first year though.

Also see: The Roaring Twenties, The Forties, The Fifties, The Sixties, The Seventies, The Eighties, The Nineties, Turn of the Millennium, and The New Tens for more decade nostalgia.

Popular tropes from this time period are:
Works About and/or From The Great Depression:

Works that are set in this time period include:

Works made, but not set, during the thirties:

As mentioned above, the film industry was one of the few to thrive during the Depression. Among the movies made (but not set) during The Thirties:

Retrieved from "https://allthetropes.org/w/index.php?title=The_Great_Depression&oldid=1762906"
Categories:
Cookies help us deliver our services. By using our services, you agree to our use of cookies.