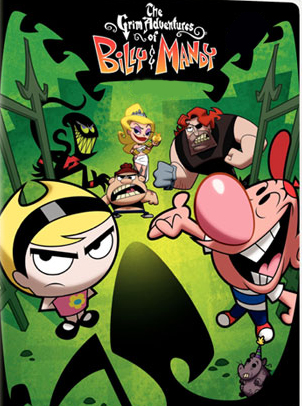 The Grim Reaper has come for a soul -- specifically, a hamster in his dying days -- but he's stopped from taking the hamster to the afterlife by two children: the blissfully idiotic Billy (the hamster's owner) and the cynical, amoral Mandy (Billy's best friend). The pair challenge "Grim" to a limbo contest to save the hamster; when Grim loses, he becomes Billy and Mandy's newest friend -- and by "friend", we mean that he's contractually bound to be the kids' friend and cater to their every whim. Grim begrudgingly serves as something of an underworld version of Mary Poppins, thanklessly placating Billy's demands for cheap entertainment and Mandy's schemes for self-profit with his magical scythe while desperately trying to find a way to be rid of the duo for good. Thus go The Grim Adventures of Billy & Mandy.

Rounding out the show's cast are Irwin, Billy's best friend and the Token Minority (who also has a massive crush on Mandy); Sperg The Bully; Mindy the Alpha Bitch; Hoss Delgado, a supernatural bounty hunter with more brawn than brains; Eris, the goddess of chaos and discord; General Skarr (formerly seen in Evil Con Carne), who now wants to garden instead of conquering the world; and Nergal, the Sumerian Death God who lives in Earth's molten core and just wants to be friends with everyone, really.

This show was actually the winner of a contest held by Cartoon Network to determine what cartoon would be their next new show. On an interesting note, Billy and Mandy ended up lasting longer than most of the shows that CN greenlit without fan input; Codename: Kids Next Door, the winner of the contest the following year, did likewise. (Think about this: those two shows, voted to greenlight status by the viewers, ended up lasting at least two more seasons than any other show CN greenlit afterward). Billy and Mandy was originally a much darker Three Shorts show that included another cartoon, Evil Con Carne (and known then as Grim & Evil), but became the more comedic (but still pretty dark) Grim Adventures of Billy and Mandy when Con Carne was dropped after the first season in an unsuccessful Spin-Off attempt.

The show lasted seven seasons (2001-2008) with two movies, a couple of specials -- including a crossover with Codename: Kids Next Door -- and a spin-off attempt called Underfist.

Tropes used in The Grim Adventures of Billy & Mandy include:
Retrieved from "https://allthetropes.org/w/index.php?title=The_Grim_Adventures_of_Billy_%26_Mandy&oldid=1950155"
Categories:
Cookies help us deliver our services. By using our services, you agree to our use of cookies.