The Guards Must Be Crazy 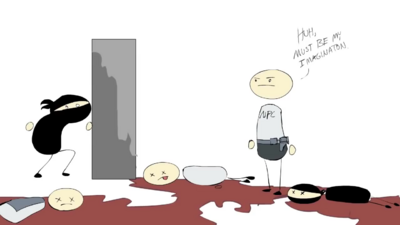 "All this constant turning my back on the dark woods really makes me miss my wife and family."

Being a guard for an Evil Overlord is a low-status, low-pay, high-risk job in an unsafe workplace, with very little long term job security, but hey, they normally have a brilliant pension plan. So it's hardly surprising that most applicants aren't exactly the sharpest knives in the drawer (not that their bosses tolerate incompetent underlings), and could be fooled by tricks that wouldn't bother an average six-year-old.

The trope name is a pun on the film The Gods Must Be Crazy.

Examples of The Guards Must Be Crazy include:

"Looks like Legolas has just asked the guards – sorry, the gards to keep an eye on Laura's room while the orcs are kidnapping her, and... it all gets a bit confused."
"So the gard walks into the room and sees the orcs, and does nothing. Legolas runs off down the hall, then runs back and asks the gards where Laura is. They say that the orcs took her, neglecting to mention that they stood by and watched..."
"And by that time, the orcs have apparently already returned to Mordor. I think we can safely assume that all the characters have gone insane."

Preed: An intelligent guard! Didn't see that one coming.

"Now, you're not supposed to enter the roo-- ARRGH!"

Dogberry: You are to bid any man stand, in the Prince's name. Verges: How if a' will not stand? \\Dogberry: Why, take no note of him, but let him go.

Spandrell: Well done, Hilred. An antiquated capsule, for which you get adequate early warning, transducts on the very steps of the Capital. You are warned that the occupant is a known criminal, therefore you allow him to escape and conceal himself in a building a mere 53 stories high. A clever stratagem, Hildred. You're trying to confuse him, I take it?

"...to say nothing of the guards' color codes, which include Red Standby Alert (apparently meaning stand around and do nothing), Red Mobilisation (wander around outside the house), and Blue Mobilisation (allow the President and his daughter to escape in a vintage car accompanied by two terrorists)."

Guard: I don't watch TV. It's a cultural wasteland filled with inappropriate metaphors and an unrealistic portrayal of life created by the liberal media elite.

Kou Leifoh: I can't believe they're attacking us! They must be really love their job!

Rufus: So Sephiroth was on board...
Heidegger: Yes.
Rufus: And it seems Cloud and his gang were on board, too.
Heidegger: ...Yes.
Rufus: They slipped through... you messed up big this time, Heidegger.

Tiffany: So that is the only key to the cell?
Guard: Yes Ma'am.
Tiffany: I am going going to need to hang on to that.
Guard: Wait you can't take the key. What if he gets sick and I need to check on him.
Beat Panel
Tiffany: And that is why you are not allowed to keep the key.

Guard: (on phone) Hello, DNA lab? Whatever you guys are doing in there-- Cut it out!