The Hitchhiker's Guide to the Galaxy (film)

Everything About Fiction You Never Wanted to Know.
(Redirected from The Hitchhiker's Guide to The Galaxy (film))
Jump to navigation Jump to search 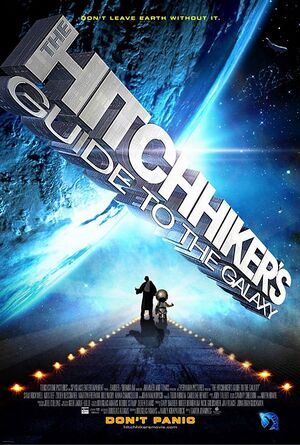 For two decades, a movie version of Douglas Adams' The Hitchhiker's Guide to the Galaxy rotted in Development Hell. But in 2003, pre-production began, and in 2005, an all-out big-budget feature film rolled out to theaters.

The film's plot starts off following the story of the first book/radio series. However like every other adaptation of the material, it diverges sharply not too far in. This time, the divergence is far sharper than any before, but this was done intentionally by Adams himself (who thought of making Humma Kavula the Big Bad, the face-paddling scene, and the POV gun entirely on his own.) This film is also the farthest adaptation to date, even going so far as to have broad humor more akin to family films, and some American sensibilities, preventing a sequel based on Restaurant At The End Of The Universe to ever be produced.

Where the other versions go straight to Magrathea, the movie takes a side-trip to Viltvodle VI, where we meet the guy Zaphod beat to become President, and the quest for the mysterious "POV Ray" is engaged upon. Originally, Zaphod was trying to find the true ruler of the universe, but here he's just as shallow as he seems. There's also the home planet of the Vogons, the focus on Arthur and Trillian as a couple, the location of the ending and the way the good guys win...

For other versions of the story, see The Hitchhiker's Guide to the Galaxy.

Tropes used in The Hitchhiker's Guide to the Galaxy (film) include:

Slartibartfast: Perhaps I'm old and tired, but I think that the chances of finding out what's actually going on are so absurdly remote that the only thing to do is to say, "Hang the sense of it," and keep yourself busy. I'd much rather be happy than right any day.
Arthur: And are you?
Slartibartfast: (self deprecatingly) Ah, no. (snorts a giggle) Well, that's where it all falls down, of course.

Marvin: Freeze? I'm a robot, not a refrigerator.

Lunkwill: Rubbish, we don't want to be happy, we want to be famous!
Fook: Yeah! What is all this "is she the one" tripe?
Lunkwill: Take his brain!

Marvin: Oof. Beat) Now I have a headache. (collapses)