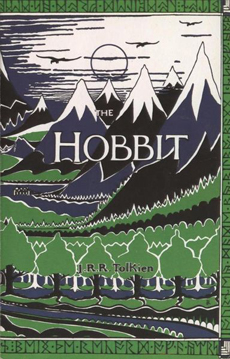 Dustcover of the first edition of The Hobbit, taken from a design by the author.

The precursor to The Lord of the Rings. The Hobbit, or There and Back Again, is also the story of Bilbo Baggins, a simple, respectable little person who is content with his sleepy life in Hobbiton until a crafty old wizard named Gandalf and thirteen dwarves hijack him for a grand adventure to slay a dragon and win back a lost treasure, forcing him to grow out of his comfortable little world. Along the way he encounters merry elves, ferocious trolls, wicked goblins, giant spiders, and other fantastic characters and creatures before coming face to face with the terrible dragon himself.

J. R. R. Tolkien wrote the story in the late 1920s to amuse his three sons. It was published on 21 September 1937 to wide critical acclaim. The book has sold an estimated 100 million copies worldwide since first publication and along with its sequel is the Trope Maker for High Fantasy.

A sequel was requested by his publishers, and as work on The Lord of the Rings progressed, Tolkien made accommodations for it in Chapter 5 of The Hobbit. These few but significant changes were integrated into the second edition. Further editions followed, correcting minor errors and reflecting Tolkien's changing concept of the world into which Bilbo stumbled (removing references to policemen, for example).

The work has not been out of print since the paper shortages during the Second World War.

Retrieved from "https://allthetropes.org/w/index.php?title=The_Hobbit_(novel)&oldid=1949853"
Categories:
Cookies help us deliver our services. By using our services, you agree to our use of cookies.