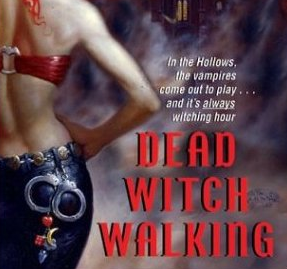 "The cuffs are used for work."

The Hollows is an ongoing Urban Fantasy series by Kim Harrison detailing the professional and personal adventures of Rachel Morgan, bounty hunter and witch, along with her partners: living vampire Ivy Tamwood, and Jenks, a pixie.

The books are set in an Alternate Universe where various supernatural beings known collectively as "Inderlanders" have lived alongside mundane humans since ancient times, but kept their identities secret from the masses until the 1960s, when a virus from a genetically modified tomato wiped out a quarter of the human population in an event known as "The Turn". Since the Inderlanders were mostly unaffected by the virus and found their combined numbers were now close to that of humanity's, they decided to reveal themselves to the world, a move that further changed the already altered post-pandemic society.

As well as six short stories:

At the time of this writing[when?] a graphic novel is also being planned.

Warning: Due to the author's extensive use of The Reveal in the series spoilers abound.

Tropes used in The Hollows include:

Retrieved from "https://allthetropes.org/w/index.php?title=The_Hollows&oldid=1944478"
Categories:
Cookies help us deliver our services. By using our services, you agree to our use of cookies.