Cookies help us deliver our services. By using our services, you agree to our use of cookies. More information

The House of the Dead (series) 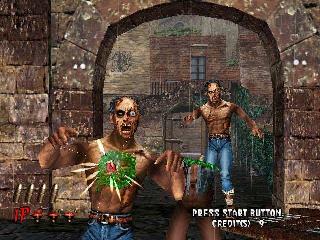 They've come for brains. You'll give them... bullets.

1) Zombies are being untidy and making an administrative burden of themselves.
2) Sharp-dressed agents of the AMS arrive and resolve to stop the crisis.
3) The villain will mention something about the threat of a Malthusian catastrophe (and the first game doesn't even bother with that).
4) But it doesn't matter to the protagonists 'cause they're suffused with the strength to forge on, no matter what! Yeah!

(However, if you still feel more intricate details are needed, we've a page for that.)

Known for its fast-paced shooting and Multiple Endings, The House of the Dead is one of those games that many play, but few ever beat (at least not without a small fortune in coins, that is). The first two games (especially the second) were infamous for hilariously weak voice acting that left you thinking the voice actors must have been instructed to sound as bored as possible, as well as an extremely stilted-sounding translation.

If you want to play a shooter game which emphasizes horror and uses traditional zombies, then you are looking at the wrong game.The House of the Dead goes in the opposite direction, just because it's cool. A great majority of the zombie population in these games either are fast, wield weapons, have supernatural powers, or are just very, very fat. Boss fights are a major example of these deviations, with boss creatures barely resembling "traditional" zombies at all, often taking the form of some freakish abomination.

None of this stops the series from being fun. The sheer ridiculousness of the games makes for some amazing boss battles and fight scenes. Better yet, this was the precursor to Dead Space: you can use precision shots to dissect the zombies in any manner you please. Torso wounds become gaping bloody holes, but do limited damage. Shoot a zombie in the arm, the arm will be blown off, and its attacks will be weaker if it gets close enough to do damage. Shoot a zombie in the leg, the leg will be blown off, and it will crawl at you (quickly). Of course, headshots are the best way to kill zombies, but only a shot between the eyes is a One-Hit Kill... zombies running at you with half their head blown off is common. Just don't stop here expecting a gripping story, nuanced characters, or some kind of social message.

The latest game in the series, the Wii-exclusive The House of the Dead: Overkill is a prequel that takes the unintentionally bad voice acting and runs with it, resulting in a B-movie grindhouse-style presentation. The game's mere existence could qualify as a Crowning Moment of Awesome for the series as a whole. An Updated Rerelease, The House of the Dead: Overkill - Extended Cut, was later released for the PlayStation 3 with Move support.

Of course, this isn't all to the series. A beat 'em up side story game called Zombie Revenge was released on the arcade and Dreamcast. After that came The Typing of the Dead, which is basically a re-release of The House of the Dead 2, only now instead of bullets you kill with powered keyboards, followed by a sequel, which rehashed The House of the Dead III (look, don't knock until you've tried it, okay?). There was a The Pinball of the Dead for the Game Boy Advance, and a rare The House of the Dead 4 Special arcade that serves as a continuation of the original 4th installment, this time the game being made into a motion ride of sorts with that switches between two screens as the zombies come after you. There's also The House of the Dead EX, which goes the comical route and put you in the role of two runaway undead lovebirds as they face against adversaries who try to split them apart. Unlike the last games, this one is more of a mini-game compilation. And lastly, the Sega Superstars series features The House of the Dead cameos, the most prominent being the latest installment Sonic & Sega All-Stars Racing, with three tracks taking place in the Curien Mansion and the aforementioned runaway undead lovebirds as playable racers.

So there you have it, 'till the fifth installment.

How could anyone do this?

G: "Care to dial down the swearing, Wash?"
Isaac: "Fuck that, motherfucker!"

Goldman: "I do not wish to kill all humans. I only wish to revert to them to their natural state."

Caesar: As you well know, Isaac, I enjoy pain. It's like a good Chinese dinner, you know, with the sweet and the sour. Expanding on that analogy, I will smile with delight (that's the sweet) as you scream for your fucking life (of course, that's the sour). *hits the Big Red Button* Ciao!

Isaac: I hate those motherfuckin' zombies!
G: "Mutants. How many times to I have to tell you to not use the Z word?"

Agent G: "Mutants. How many times do I have to tell you not to use the Z-word?"'

Caesar: You know of Clement Darling, yes, the cretin prison warden? It was he who originally discovered the mutant compound in a secret lab beneath his prison. Clement's ambitions are small minded, Isaac. But he has friends, powerful friends. (Curien and Goldman, if you haven't guessed it yet.)

Lisa: This is our future, we'll handle it ourselves.
Daniel: You're not my father!

James: Is that all you have to say, Goldman?

Washington: Frankly, Casanova, I'd be more worried about reading the last 24 hours as a damning fucking indictment of contemporary feminism.
G: Beg your pardon?
Washington: I just think two dick-wielding cop cliches taking down a hundred-foot birthing mother is a statement fairly limited in its interpretations.