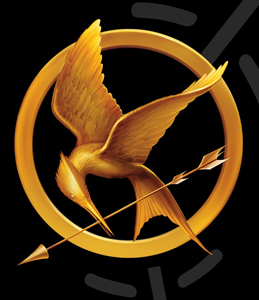 It's just a bird, nothing more.

"Happy Hunger Games! And may the odds be ever in your favor!"

The Hunger Games is a trilogy of young adult novels written by Suzanne Collins that take place After the End in Panem, a nation in what used to be North America that is divided into numbered districts and a large capital city.

In the first book, heroine Katniss Everdeen takes her sister Primrose's place when Prim is chosen to be a contestant ("tribute") in the Hunger Games: an annual televised Deadly Game wherein 24 teenage contestants are locked in an arena to fight to the death until only one remains. Her struggle for survival ends up igniting a firestorm that quickly goes beyond her control, until she finds herself embroiled in an all-out war that almost makes the arena look like Disneyland.

The three books are:

Tropes used in The Hunger Games (novel) include:

Finnick: "Why? Do you find this... distracting?"

My name is Katniss Everdeen. I am seventeen years old. My home is District 12. I was in the Hunger Games...

"What day is it?" I ask no one in particular. Boggs tells me September begins next week. September. That means Snow has had Peeta in his clutches for five, maybe six weeks.