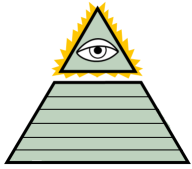 The Ancient Conspiracy. The Omniscient Council of Vagueness. The One World Order. Founded at the dawn of human history, if not earlier, they gather influence and wealth, spinning their webs of lies and deceit in the shadowy heights of society. Or maybe they're just a bunch of rich white thugs with pretensions of grandeur. Either way, when a creator of popular culture needs a name for this group, they often turn to "The Illuminati" and their "Eye in the Pyramid" symbol, "the Eye of Providence"[2]; both have percolated their way into semi-general use, come across as refined and ancient, and (mostly) aren't under copyright.

"Illuminati" means "the enlightened ones" in Gratuitous Latin. There was a Masonic-like organization of intellectuals which took this name in Real Life Bavaria in the 1770s, but it was eventually disbanded by the Bavarian government. There are people who fervently believe the Illuminati survived this purge, orchestrated The French Revolution (as part of their One World Order efforts), and still exist, very much as described above, but... this really isn't the place to discuss it; go check out Wikipedia's article.

This name is bandied about a lot over in the Wild Mass Guess department. See also The Knights Templar.

For similar groups that are not named Illumaniti, see Ancient Conspiracy, The Omniscient Council of Vagueness, or One World Order.

Examples of The Illuminati in popular culture include:

Retrieved from "https://allthetropes.org/w/index.php?title=The_Illuminati&oldid=1800566"
Categories:
Cookies help us deliver our services. By using our services, you agree to our use of cookies.