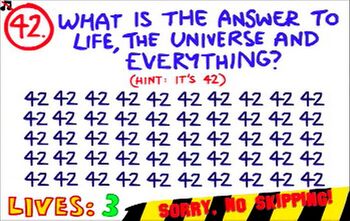 How to describe this game? Hrm...well, what I Wanna Be the Guy is to platformers, The Impossible Quiz is to quiz games.

You can play the game here. Its sequel, The Impossible Quiz 2, is here. The first two chapters of the episodic Impossible Quiz Book can be found here and here. If the finished games are too hard, try the prototype version here.

Tropes used in The Impossible Quiz include:
Retrieved from "https://allthetropes.org/w/index.php?title=The_Impossible_Quiz&oldid=1643712"
Categories:
Cookies help us deliver our services. By using our services, you agree to our use of cookies.