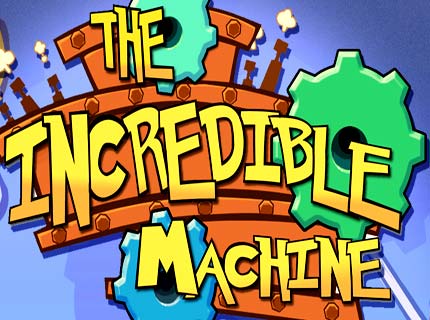 A Puzzle Game published by Sierra Entertainment in 1992, The Incredible Machine (a.k.a. TIM) centers around the construction of Rube Goldberg Devices. The player is provided with a predetermined set of parts to use in order to achieve the given objective. There are over 100 puzzles to complete, each of varying difficulty, but custom puzzles and machines can also be made (with full access to all the parts in the game). Many parts are available, ranging from the simple (gears and ropes) to the downright bizarre (alligators and blimps).

The game's family-friendly quality and subtle moments of humor and satisfaction led to widespread popularity. Over the course of nine years, seven more titles were released, and the series has since been a recipient of several awards.

The following tropes are common to many or all entries in the The Incredible Machine franchise.
For tropes specific to individual installments, visit their respective work pages.
Retrieved from "https://allthetropes.org/w/index.php?title=The_Incredible_Machine&oldid=1709647"
Categories: