Everything About Fiction You Never Wanted to Know.
(Redirected from The Incredibly Strange Creatures)
Jump to navigation Jump to search 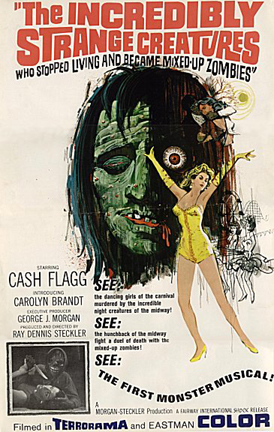 Originally titled The Incredibly Strange Creature: Or Why I Stopped Living And Became A Mixed-Up Zombie; you can see why they were forced to change it by Columbia. (Why Columbia would bother to threaten a lawsuit is an utter mystery.)

This freaky little film with the famously unwieldy title was directed by the late Nicholas Cage-a-like Ray Dennis Steckler. Unemployed, free-wheeling Jerry (director Steckler, under the pseudonym Cash Flagg) and his "foreign" roommate Harold have fun with Jerry's well-to-do girlfriend Angela; he takes her to places she's never dreamed of—like the amusement park out in Long Beach. Oh, and he's totally into that night club/strip joint on the carnival's main concourse, much to Angela's ire. Oops. Unfortunately for Jerry, the stripper he's interested in is the sister of the film's Big Bad, evil fortune-teller Estrella, who keeps a harem of acid-deformed "zombies" in her place of business... attached to the night club on the carnival's concourse. Oops! Oddly enough, people keep tumbling onto Estrella's dahrty leetle seecret dirty little secret, and so she hypnotizes Jerry and sends him out to silence them, then tosses him aside. Eventually the "zombies" escape their evil mistress and begin a campaign of minor mayhem through the carnival concourse before being gunned down. Jerry too, being mistaken for one of them, is chased by over-eager young cops out to the beach for a final confrontation.

The Incredibly Strange Creatures (for those of us who don't have the pecs to swing the full title around) billed itself as "the first monster musical!" beating out The Horror of Party Beach to the honor by a mere month. Considering the general crappiness of either film, the "honor" involved in that is dubious at best. Like that movie, it features many incidental song-and-dance numbers, ostensibly performed at the carnival's night club. It should be noted, of course, that almost all of these performances were inserted into the film wholesale and therefore have absolutely no bearing, narrative or thematic or otherwise, on the story; the only connection is one particular night club dancer who figures into the plot (only as a victim).

Tropes used in The Incredibly Strange Creatures Who Stopped Living and Became Mixed-Up Zombies include:

Dancer: That's your idea of a big evening? I should slave over a hot stove cooking dinner for you?
Barker: Why not?
Dancer: [Shrug Take Who's going to wash the dishes?