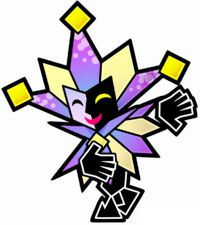 The constructive troll, a common feature at the Standard Royal Court. Much like his historical counterpart, the Jester's foolish appearance and demeanor means he's generally laughed at or not taken seriously. The upside to this is being able to pretty much speak his mind in the most blunt way possible without fear of reprisal.

The Jester, or his antagonist counterpart, occurs once other characters stop being genuinely offended by him. The Jester gets to give the alternate point of view in the most potentially rude way possible, which sometimes helps his cause, because the audience members who disagree with him can write it off as being a jerk, while those who agree with him can snicker in their sleeves. If they become (or pantomime) The Protagonist, they typically play The Fool.

Many writers have noted that it's a great cover. No one would guess that the harmless jester is really a bodyguard, assassin, or spymaster.

Not to be confused with a Villainous Harlequin, a villain who really is as foolish as she appears, or The Joker.

Examples of The Jester include:

Retrieved from "https://allthetropes.org/w/index.php?title=The_Jester&oldid=1589642"
Categories:
Cookies help us deliver our services. By using our services, you agree to our use of cookies.