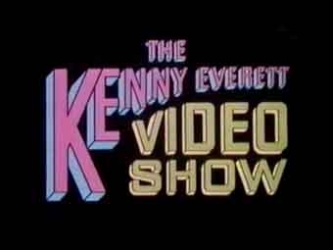 Legendary short-lived (32 episodes over 4 series) British Variety Show/Sketch Comedy show, hosted by British DJ Kenny Everett. It was made by Thames Television and was broadcast on ITV from 1978 to 1981.

Originally, the Video Show consisted of Everett in the role of a visual DJ linking studio performances from bands, singers, and the show's resident dance troupe Hot Gossip, along with occasional sketches and cartoons featuring Captain Kremmen, a science fiction hero voiced by Everett and originally developed for his Capital Radio shows. As the series grew in popularity, though, the linking material became longer and more varied to such an extent that the final series, renamed The Kenny Everett Video Cassette, focused far more heavily on the comedy with just one musical guest per week.

To the growing repertoire of the program, Everett added a small cast of characters, all played by him: Aging rock-and-roller Sid Snot, unsuccessfully flipping cigarettes into his mouth; Marcel Wave, a lecherous Frenchman played by Everett wearing an absurdly false latex chin; and "Angry of Mayfair", an upper middle class City gent complaining of the risqué content of the show, banging the camera's lens hood with his umbrella, and then storming off, turning his back to us, only then to be revealed as wearing women's underwear in lieu of the entire back half of his suit.

He also created the never-seen character of "Lord Thames", the fictional owner of Thames Television. This character was often the butt of Everett's rants and was said to symbolize his contempt for senior management at the company, claiming they lived behind an ancient, cobweb-covered door marked as the "Office of Saying 'No'". Thames never disciplined him for these comments, unlike prior employers such as the BBC.

The Video Show was also noteworthy in that the sketches were performed to the studio crew and technicians with their laughter heard on the finished program, unlike Everett's later BBC series, The Kenny Everett Television Show, which used a live audience. Bloopers were often not edited out of sketches.

The Kenny Everett Video Show made it across the Atlantic in the early 1980s, and for a short while ran at 1 AM on Sunday mornings after Saturday Night Live in many markets.

Tropes used in The Kenny Everett Video Show include:

Retrieved from "https://allthetropes.org/w/index.php?title=The_Kenny_Everett_Video_Show&oldid=1832893"
Categories:
Cookies help us deliver our services. By using our services, you agree to our use of cookies.