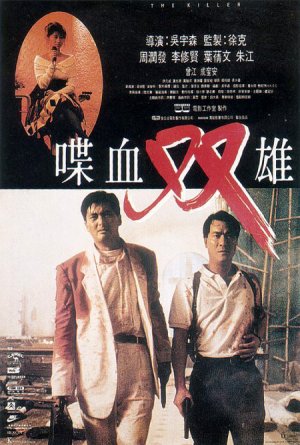 The Killer (喋血双雄) is considered one of John Woo's all time greatest films, drawing from such influences as Jean-Pierre Melville's hitman drama Le Samouraï and Chang Cheh's bloody masterpiece Vengeance. Chow Yun-Fat plays Hitman with a Heart Ah Jong, whose life changes forever when, in the middle of carrying out a hit at a restaurant, he accidentally blinds a beautiful lounge singer by the name of Jenny, played by Sally Yeh, with the muzzle flash of his gun. Several days later, Jong rescues Jenny from muggers who are out to rob her and gets to know the girl a bit better and is all the more wracked with remorse for it. Jong wants to leave the business behind so that he can be with her, but in order to raise the money to have Jenny's eyes fixed, he will need to perform one last job for his triad, which is to kill a guy by the name of Wong Dung-Yu.

Unfortunately for Jong, things do not turn out as planned. The boss of the triad, Wong Hoi, who is the nephew of the guy he sent Jong out to kill, would rather kill Jong than hand over the money that Jong's handler Fung Sei promised to him, as he wants to clear the table for his ruthless ambitions. Meanwhile, a cop by the name of Inspector Li Ying (played by Danny Lee, who is good at playing Cowboy Cops in general) has picked up Ah Jong's case, and as he gets to know both the assassin and the woman that he's going through hell for, the two heroes on opposite sides of the law develop a respect for each other that soon turns into a bond of friendship akin to blood brotherhood. As Fung Sei goes through hell to try to get the money for his friend, Wong Hoi has hired a replacement killer by the name of Paul Yau and a virtual army of assassins to get rid of Jong, and as everything goes straight to hell, Li becomes Jong's only ally against his double-crossing boss in a blazing final showdown that has come to define Heroic Bloodshed.

This movie built on the genre that was started with A Better Tomorrow and Heroes Shed No Tears and expanded upon it. In addition to the Heroic Bloodshed favorites of Guns Akimbo, slow-mo and themes of loyalty and betrayal. The Killer also popularized the use of the point-blank Mexican Standoff and introduced the Disturbed Doves, a motif that would show up in John Woo's later movies and made their first appearance during the apocalyptic church shootout that ended the movie. It also has one of the most tragic endings that Woo has ever done, in keeping with the tendency of Hong Kong and Asian cinema in general to end their more dramatic movies on a downer note.

Tropes used in The Killer include:
Retrieved from "https://allthetropes.org/w/index.php?title=The_Killer&oldid=1833530"
Categories:
Cookies help us deliver our services. By using our services, you agree to our use of cookies.