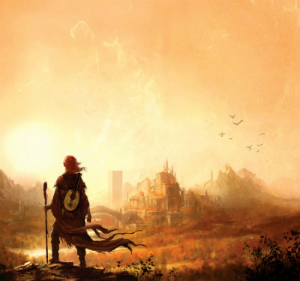 The Kingkiller Chronicle is set to be a trilogy of Heroic Fantasy books written by Patrick Rothfuss.

Kvothe, the eponymous kingkiller, is a living legend after having given up his former life and gone into hiding as the innkeep Kote. He is being sought out by Chronicler, a famous scribe, who wishes to write down Kvothe's life story. Kvothe declares that telling this story will take three days, thus providing a Framing Device for the trilogy, the vast majority of which is told in first-person narration. While this orial discourse is the main focus of the novel, frequent interruptions make it clear that his journey is not yet at an end.

Tropes used in The Kingkiller Chronicle include:

I was one of those. I meddled with dark powers. I summoned demons. I ate the entire little cheese, including the rind.