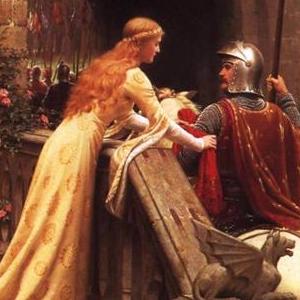 The Knight in Shining Armor receives The Lady's Favour.

The male lead is about to go off to fight the Big Bad (or, on occasion, just the bad guy of the week), and there is a very real possibility that he won't be coming back in one piece. Knowing this, his female love interest decides it would be a good idea to hand him an object—some piece of jewelry, a trinket, a piece of clothing, a token of some sort—that she claims is of great personal importance to her (how important it really is is arguable, but more often than not, it's really only valuable in the personal sense). She makes him promise that he will give it back to her, thereby creating a small bit of assurance that he will return from the battle alive. He invariably will, if for no other reason than he promised he would return her "most prized possession."

If the couple is still in Will They or Won't They? limbo, this is a sure sign that the scales are leaning more toward Official Couple. This is also a frequent possession of someone suffering under The Dulcinea Effect.

Tales taking place during Medieval times, particularly those involving Courtly Love contain a literal favour from the lady. Generally an article of clothing made specifically for that purpose.

Sub-Trope of It Was a Gift.

Examples of The Lady's Favour include:

This story was still early enough in the series that Kenshin had a strong tendency toward mild snarking; it also codified the Kaoru-lambasting-Kenshin thing. Although the 'chase of rage' scenario seemed to be about 2/5ths Kaoru being nutty and 3/5ths their attempting to make it clear that everything was still normal between them after he went into a killing rage on her behalf and she nearly died because of her connection to him and she cared enough about him to break a powerful hypnosis...

Each knight wore a lady's token, a glove, scarf or rose, bound to his helmet or fastened to his sword-belt.

He had gone to the tree ahead of the gang to remove the blue ribbon. Carefully folded, it now lay over his heart. He was promising himself much comfort with that ribbon, when he would leave for the city next month to begin his studies and dream the summer over again. It would help to make things tangible. When he was dressed as other men, and at his work, he knew where he meant to home that precious bit of blue. It should be his good-luck token, and he would wear it always to keep bright in memory the day on which the Angel had called him her knight.

His answer was -- he would unto the stews;
And from the commonest creature pluck a glove.
And wear it as a favor