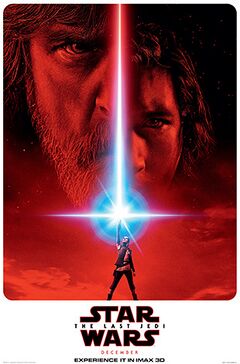 The Last Jedi is the sequel to The Force Awakens, written and directed by Rian Johnson, and is the eighth film in the main continuity of Star Wars.

Armed with the whereabouts of the Resistance's main base and emboldened from their to destroy it in The Force Awakens, the First Order dispatches an task force to finish the job. The Resistance, fearing retribution from the First Order, wastes no time with their evacuation. But even after narrowly escaping the devastation of their hideout and sustaining noticeable losses in ensuring skirmishes, the First Order maintains their relentless pursuit. Fearing the imminent destruction of the Resistance, Rose Tico and Finn set off in search of a new ally who can turn the tide of battle as Vice-Admiral Holdo executes her contingency plan to save her passengers. Meanwhile, Luke Skywalker is training Rey on how to use the Force in order to bring Kylo Ren back to his senses.

Tropes used in The Last Jedi include:
Retrieved from "https://allthetropes.org/w/index.php?title=The_Last_Jedi&oldid=1776333"
Categories:
Cookies help us deliver our services. By using our services, you agree to our use of cookies.