The Legend of Kyrandia 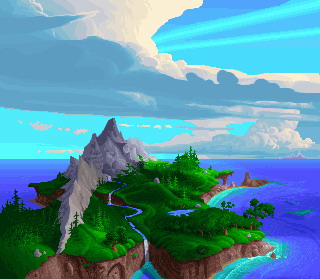 The Legend of Kyrandia is an Adventure Game trilogy made by Westwood Studios. It consists of the following titles:

The series happen in a High Fantasy setting, in the fictional land of Kyrandia.

King William and Queen Katherine have been murdered by the court jester Malcolm. Imprisoned, he manages to escape and proceeds to take over Kyrandia using his great magic powers. Meanwhile, Brandon, a young man living in the forest with his grandfather Kallak, finds out that he is the son of the murdered king and queen, and that he must stop Malcolm from his evil designs and retrieve the Kyragem, center of the balance of nature. In order to do this, he must gather magic powers himself from the Mystics of the Kingdom.

The second game is about Zanthia, a young female wizard who has been asked by the alchemists to go to the center of the Earth to retrieve a magical anchor since Kyrandia has been disappearing piece by piece. A giant glove, The Hand, seems to be behind all this.

The third game sets Malcolm, the Big Bad of the first game, as the playing character. He has finally been freed from his statue prison and seeks to clear his name from the crime of killing King William, if only so that he can finally get some sleep.

Tropes used in The Legend of Kyrandia include:
Retrieved from "https://allthetropes.org/w/index.php?title=The_Legend_of_Kyrandia&oldid=1708143"
Categories:
Cookies help us deliver our services. By using our services, you agree to our use of cookies.