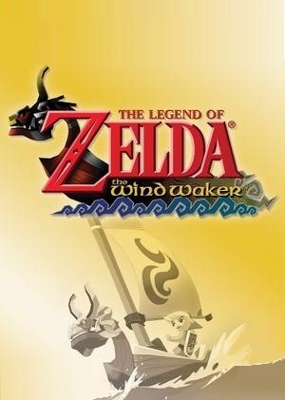 The tenth game in The Legend of Zelda series would be the first Game Cube release: The Wind Waker (known as Baton of Wind in Japan), released in Japan in late 2002 and the rest of the world in early 2003. This game, explicitly set some time after Ocarina of Time (roughly 100 years), showed off cel-shading techniques to produce a game visually reminiscent of anime. Its major gimmick was the titular conductor's baton, the Wind Waker, which among other things, allowed Link to control the wind. Following from the first true multiplayer Legend of Zelda game, Four Swords, it also included a limited two-player mode using the Game Boy Advance cable, allowing a second player to control Tingle and assist (or hinder) the player.

Set on an ocean, a new Link (the "Hero of Winds") faces a restored (and even more tragic) Ganon and does a lot of sailing. There are forty-nine islands of varying importance and size, and the sea is vast enough to hide lots of secrets and treasure.

Tropes regarding the Manga adaptation can be found here.

Tropes used in The Legend of Zelda: The Wind Waker include:
Retrieved from "https://allthetropes.org/w/index.php?title=The_Legend_of_Zelda:_The_Wind_Waker&oldid=1961767"
Categories:
Cookies help us deliver our services. By using our services, you agree to our use of cookies.