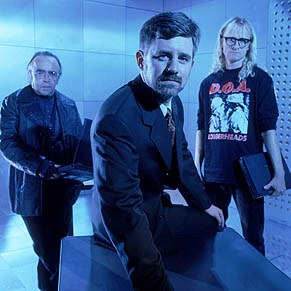 Short-lived spinoff of The X-Files featuring the adventures of Mulder's conspiracy-crazy friends the Lone Gunmen. The series lasted from March to June, 2001.

The show focused on small-time conspiracies rather than mythological beasts and alien invasions, but while it was more plausible than The X-Files it was also more lighthearted. Attempts to create a serious Myth Arc were thwarted when the series was cancelled after only thirteen episodes. The X-Files episode "Jump the Shark" was a Fully-Absorbed Finale for the show.

If for nothing else, the show is notable in that its pilot episode "predicted" the terrorist attacks on the World Trade Center. Also noted for predicting what happened after that, too.

Tropes used in The Lone Gunmen include:

One character refers to the Gunmen as a "little mongoloid Girl Scout troop".

Retrieved from "https://allthetropes.org/w/index.php?title=The_Lone_Gunmen&oldid=1826228"
Categories:
Cookies help us deliver our services. By using our services, you agree to our use of cookies.