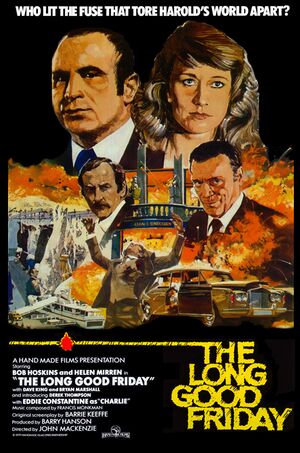 A British gangster film starring Bob Hoskins as Harold Shand, an old-school London Gangster planning to make the leap from organised crime to legitimate business with the financial aid of some American Legitimate Businessmen and some potentially lucrative property details. Success is within his grasp when a mysterious group of hitmen start targeting Harold and his organisation, executing two of Harold's closest accomplices and bombing several of his businesses.

His deal threatened, Harold starts to use all his muscle and contacts to try and find out who's attacking him -- but when it starts to look as if betrayal could be coming from close to home and prior dodgy dealings might be coming back to bite him, it becomes clear that it's going to be a very long Easter weekend for Harold Shand.

Tropes used in The Long Good Friday include:
Retrieved from "https://allthetropes.org/w/index.php?title=The_Long_Good_Friday&oldid=1521572"
Categories: