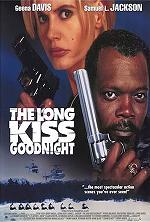 Samantha Caine is a perfectly normal mother and schoolteacher. She lives in a peaceful suburban neighborhood, raising her daughter Caitlin (Yvonne Zima), and couldn't want for anything. However, Samantha has no past. Suffering from amnesia after being found badly injured, Sam doesn't know who she was. But that's okay - some other people know who she was, and they're coming to find her.

Now she has to find out why they want to kill her.

The Long Kiss Goodnight (1996) stars Geena Davis as Samantha Caine/Charly Baltimore and Samuel L. Jackson as Mitch Hennessey, a private investigator she hires to find out about her past. During the course of his investigation, Hennessey uncovers some unpleasant truths, and Samatha must decide whether to abandon her past or embrace it at the cost of her family.

Tropes used in The Long Kiss Goodnight include:
Retrieved from "https://allthetropes.org/w/index.php?title=The_Long_Kiss_Goodnight&oldid=1881413"
Categories:
Cookies help us deliver our services. By using our services, you agree to our use of cookies.