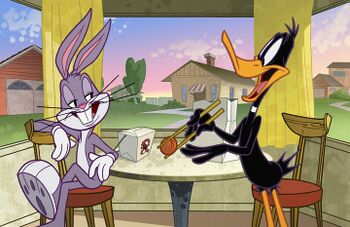 A show that premiered in 2011 on Cartoon Network, being yet another attempt at reviving the Looney Tunes and Merrie Melodies franchise. This time, the classic characters are placed into a low-key, Slice of Life sitcom, where Bugs Bunny is stuck sharing a house in a suburban neighborhood with a freeloading Daffy Duck, and the rest of the Looney Tunes are all neighborhood friends. Taz is Bugs' pet, Yosemite Sam is the annoying neighbor, and Speedy Gonzales is a stray mouse who inhabits their home. Wile E Coyote and The Road Runner are still in their own separate shorts in the desert, but in CG this time. Both are interspersed with Merrie Melodies original music videos showcasing other characters.

After several delays, it finally premiered on May 3rd, 2011. The show ran for two seasons, with a total of 52 episodes and one movie. It was wrapped up to make room for the next Looney Tunes re-launch, wabbit.

Tropes used in The Looney Tunes Show include:
Retrieved from "https://allthetropes.org/w/index.php?title=The_Looney_Tunes_Show&oldid=1703217"
Categories:
Cookies help us deliver our services. By using our services, you agree to our use of cookies.