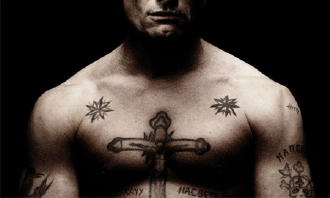 The Mafia -- but Russian!

While mobsters existed in Imperial Russia and the Soviet Union (a lot of people in The Gulag were actual criminals by objective standards), they really exploded with the collapse of the Soviet Union. There was widespread unemployment, many ex-military men and others with the right skill-set for this sort of thing, but no work. Old KGB men and lots of abandoned military hardware quickly found themselves both with new homes. Note that before The Great Politics Mess-Up, it was kinda taboo in The Mafiya to accept people who once wore uniforms and shoulderboards of any kind. After WWII, when the majority of Soviet male population (including the crooks) served in the Red Army, it even caused a major internal conflict in the gulags, called "Bitch Wars" (Сучьи войны), when the vory v zakone refused to welcome back their former peers who fought in the war. But after the USSR fell, this restriction became mostly obsolete.

Russian mobsters engage in all the activities that the Italian mobsters do. However, they are frequently depicted in a much more openly ruthless, sadistic, brutal and vicious fashion than the Italian Mafia, without the thin veneer of class and sophistication that many depictions of the Italian Mafia have built up around the organisation. This is often explained by them being tough enough to survive and prosper in the underworld of both the Soviet Union and post-collapse Russian society, neither of which were/are exactly healthy environments for milquetoasts to begin with.

"Organizatsiya" ("The Organisation") is the name the Russian Mob outside of Russia use for themselves. In Russia proper, they are called "Bratva" ("The Brothers"). Members are called "tolkachi" ("pushers") or "bratki" ("bros"). There's a subtle distinction in terms:

Mafiya members have a system of symbolic tattoos that reflect their position in the hierarchy and their history of crimes and prison terms. It even has symbols for "snitch" and "prison sex slave"; these are usually tattooed forcibly, as is to be expected.

During the years following the collapse of the USSR, The Mafiya was very prominent in Russian life, running many protection rackets that most small to medium businessmen had to deal with. Even now, it's far from being gone, though crooked police officers are the ones running most protection rackets now, not The Mafiya.

Something that no western media and little Russian media touch upon is "Fenya" - a highly extensive thieves' cant that makes true Bratva dialogues indecipherable to civilians. Western productions have more than enough problems with regular Russian, and Russian productions would have to rely on Footnote Fever or assume viewers have extensive knowledge of the criminal world.

Note there are also Russian Gang-Bangers, called gopniki. The name comes from "gop-stop" (a Fenya term for mugging) and the same "nik" suffix as in "beatnik". They are not part of The Mafiya, but rather your garden variety petty criminal youths from the Wrong Side of the Tracks, speaking badly bastardized Fenya mixed with Cluster F-Bombs, practicing street robberies, vandalizing buildings and beating the crap out of gopniki from another 'hood. Some of them eventually grow into full-size bros. Some don't.

Aside from the Bratva proper, there are also ethnic mafiyas in Russia, mostly from the Caucasus. Some of them follow the usual Bratva mold, but are even more vicious and ruthless. Some (most famously the Chechen Mafiya) do not, and are even worse.

See also: Yakuza, Former Regime Personnel, The Mafia, The Triads and the Tongs, The Cartel and The Irish Mob. Often the Ruthless Foreign Gangsters in works set after 1991.

The Mafiya is featured in or referenced by the following works:

Retrieved from "https://allthetropes.org/w/index.php?title=The_Mafiya&oldid=1712428"
Categories:
Cookies help us deliver our services. By using our services, you agree to our use of cookies.